Today we talk about how Luke Battiloro broke into the highly competitive and intimidating alcohol industry with Vavoom Vodka by doing the unexpected. He took the fight into a completely new arena by breaking through the e-commerce space and selling direct-to-consumers and exclusively online!

Why did he choose such an unconventional strategy to launch his first-ever venture in the alcohol industry? And, how did such a play develop in the uncertainty that was 2020?

Learn more below in our in-depth interview with Vavoom Vodka’s own Luke Battiloro!

Hello! Please introduce yourself to our readers. Who are you and what do you do?

Luke Battiloro: Hello, I’m the founder and CEO of Vavoom Vodka! I got my start as an entrepreneur producing leads for companies — running traffic to their websites for bigger and better conversions.

Bouncing around from job to job like that, I was able to experience quite a few industries up close and personal. Like the supplement industry, which I spend the better part of 2013 running through its paces. Or, more recently, CBD, where I was part of a group that had actually been one of the first to ever sell it online (and sell it successfully at that!). Back then barely anyone knew about cannabis, so it was a pretty big ordeal getting the traction that we needed to get it moving, but we managed in the end. And, it’s that very experience that brought me to the alcohol industry. Or, more specifically, to selling vodka directly to consumers online.

What’s something about you that not many people know?

Luke Battiloro: I regularly ‘train’ my brain with something I like to call ‘neuro-hacking’. It’s a bit out there, as far as habits go, but I take it seriously. See, I’m a risk-taker. I enjoy challenges. I like learning new things. And all that translates well into both my business and personal life. But even though that comes naturally to me most of the time, since I’m not the type of person to leave things half-way, I wanted to push this aspect of myself to the next level.

This involves regularly taking nootropic supplements for improving my overall brain health, and regularly training my underwater breathing using the Tummo breathing technique known widely as the Wim Hof breathing method — which is an exercise that allows me hold my breath last up to 4 minutes at a time It’s a serious adrenaline rush, which is exactly what I want, since it hits the aspect of my subconscious that I want to improve upon. Something I call my ‘stress-response’, or more simply, that state of being that pushes a person to move or do something when things get hard.

Adding to that, how exactly has this habit improved your life since you began? What benefits has it provided you?

Luke Battiloro: On a more personal level, ‘hacking my brain’ has done a lot to improve how I look at things, like on the whole. Just last month, I was able to tackle a life-long fear of mine. More specifically, I spent some time in Florida at the end of last year in Florida, swimming with the sharks, and facing my long-lived fear of them. 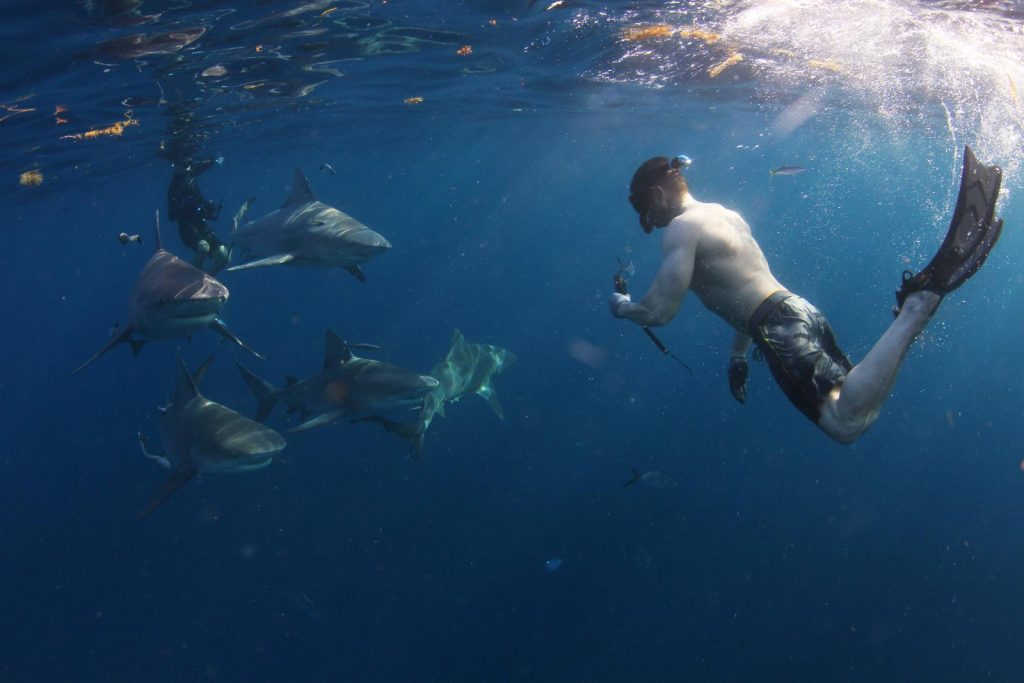 Kinda cheesy, but accurate! And, as you might’ve guessed, this new-found confidence transfers very easily to the way I do business. I’m even more fearless than before. And, more importantly, I’m more willing to push boundaries for the sake of the wins that I’m sure all of us entrepreneurs chase regularly.

Why is pushing boundaries so important to you as a business owner?

Luke Battiloro: If you don’t move, if you don’t push, you won’t get anywhere. And, I think that’s something a lot of entrepreneurs struggle with. Actually, on that subject…

There was this survey that came out a while ago (published by the McKinsley Global Innovation), that found that 84% of executives believe that innovation is important to growth strategy. That sounds about right, doesn’t it? But then, that same survey continues to report that, of those executives, only 6% are satisfied with their performance in terms of innovation.

Suffice to say, that’s a pretty big disparity and a pretty serious problem. More importantly, though, it’s also a proven weakness of most companies out there, one that I’m not afraid to take advantage of to win. After all, if you belong to that 6% group, there is no denying that you would be ahead of your competition — and in more ways than one at that.

Now, shifting subjects to your vodka brand, Vavoom Vodka. How exactly did you come up with the idea of selling alcohol online?

Luke Battiloro: The e-commerce aspect of it was inspiration drawn directly from my previous experience with CBD. Like I mentioned earlier, my group and I were actually one of the first people to start selling CBD online. And I made use of all the knowledge that I gleaned from that experience and turned it anew with Vavoom Vodka.

This ended up being exactly the right play. Because, after COVID hit, there have been many big companies out there asking how exactly it is that we are able to do what we are doing. And, in the meantime, while they were playing catchup, we were able to grow about 300%!

Now, can you tell us a little bit about how you produced your own vodka? According to our sources, you came up with the bottle design yourself, correct?

Luke Battiloro: Oh, yes I did! I actually did my best to play a role in every step of the creative and production process. As soon as I got it in my head to create a vodka myself, I dived deep into it. From designing the glass bottle that it came in, to formulating the actual vodka with a guy who’s had decades of experience creating custom vodka, and, of course, the marketing aspect that followed.

For our readers who may have only just heard about your business, how would you describe the Vavoom Vodka experience?

Luke Battiloro: Our vodka is smooth. One of the smoothest in the market, in fact. It’s premium spirits, five-times distilled, 100% grain-based, and gluten-free.

The experience matches our fine-art bottle. Which is elegant, a little louder than life, maybe, but definitely something to tell your friends about. That had been what inspired me to actually make my own vodka, after all. I wanted something a bit on the wilder side. Something that stood out. And, if it’s not wrong for me to say so myself, I think we were able to achieve exactly that.

Can you tell us a little bit more about the lay of the land right now? What has 2020 been like for you? And, what do you expect now that we’re well into the new year?

Luke Battiloro: This past year for us at Vavoom has been majorly successful. Things have been going wonderfully. We’re growing faster than ever before, and we’ve not run out of the passion that saw us this far. As for the future, I’m positively optimistic. The journey so far has been incredibly thrilling, and I’m looking forward to how much more we’ll be able to grow.

And lastly, do you have any tips for entrepreneurs that are perhaps on the cusp of ‘burning out’?

Luke Battiloro: Try not to think too much about the little details. It’s easy to break up your day into quarters and take it from there. And even easier to get stuck in your head trying to figure out why the sales aren’t coming in. I get that. But, don’t let it happen. Break your plans down into months. Keep the big picture in your head and focus on the core problems of your business.